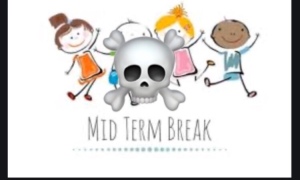 The midterm break was supposed to be my time to write write write, but instead, I ended up to drive drive drive.
Daughter number one, now also known as the teenager, went from class’ outcasted to class’ queen of the socialite. Don’t get me wrong, it’s brilliant that she had settled well in the new school and made a variegate circle of friends, but I and daughter number two were looking forward a much quieter and lazier week especially considering that we had not a day without rain.

The most positive thing about the non-chiling but chilly week of midterm, was that we got to meet with our friends from Boston. We went into town and spent a few pleasant hours with them before enjoying a stroll around.
The city was as intense as ever and full of Italians and Spanish tourists.
Absolutely normal, except that when we got back that very same evening, we heard about the outbreak of coronavirus in Italy. I can’t deny I did panic a little far more than a few after realizing the travelling husband was just back from Italy where he spent an entire week going around the most affected areas.
So now not only he could be infected, but he could have spread it merciless to everybody.
Thankfully nearly three weeks later, he has been cleared, but his company stopped all the travelling and here it is when the big panic assaulted me.
Ortensia is not used to having him home every evening.
NO more hassle-free dinners and early PJs evenings for a while. And the worst is that we don’t know how long this “a while ” will last.

In fairness, I can see he’s starting to feel impatient as well.
Of course, not because he is home all week with his lovely wife and daughters and hiper-farting dogs; it has more to do with the fact that he has to shower in the girls’ bathroom and he hates it.
.
It all started the week before the midterm.On sunday evening, the husband came in to bathroom while I was showering and with extreme calm, he knocked on the shower door and kindly invited me to hurry up because there was water dripping down the kitchen ceiling.
Disappointed that he didnt come in with bad intention but even more astonished that he managed to keep so calm, I rushed out the shower and went downstairs to check.
He normally goes bananas for this kind of things thinking at the cost of fixing them; but not this time. And neither he blamed me. ( last time that happened it was because I removed all the sealing as it was dirty and dint replace it)
Something was not right: either he had taken an overdose of valium, or something else was going on.
On Monday he was going to leave for two weeks, that was why he was so calm. The shower wouldn’t have been a problem of his as he would have been showering in fancy hotels, and with some luck, by the time he was back, it would have been fixed.
Well Well Well, it turned out I am not the only one whose plans got disrupted. On that Monday the travelling husband never left because of the company travel band; so I have to make dinner every night and not slip into my pjs until after it, but he has to shower in the gils bathroom until the good old plumber finds time for our shower.