And after a long and unexpected break, Ortensia is back. Unfortunately, when life gets in the way, there is no much that you can do. I had to take my time an on top of nursing my poor Clara,(who is doing much better), I also had to ponder a change in career. They say it is never too late and grab the chance when it arrives so …..can a fortysomething woman, with a bit of extra weight on her hips, suddenly become a pole dancer?
It all started a few weeks ago when accidentally I slapped one of the chandeliers over the kitchen island. It was not a hard slap but the thing half-collapsed. The husband was away hunting with a friend who was staying with us for a few days, and so I had a few hours to try to fix it. Why was I so adamant about hiding the accident? Because considering it was a few months that I was stressing my other half about changing the two kitchen chandeliers, I was not so sure the story of the accident, even if true, would have sounded genuine.
After multiple attempts, I had to accept the fact that there was no way I could fit that lamp back in place.
When the husband and the friend came home, they immediately spotted the lamp hanging crookedly from the ceiling. When I explained that it all happened accidentally while dusting, they both seemed to believe me. I was speaking the truth, after all. It was not that fed up with old chandeliers I hit them with a tennis racket or anything of the sort.
The travelling husband tried to fix it too. Considering the hassle it had caused him to fit them, he worked hard and adamantly, but still unsuccessfully too. Now the only option was to remove them both and replace them.
I can’t say I was unhappy with the outcome of the events, but of course, I could n’t show it. I spent the evening cursing my clumsiness instead and googling for close by lighting centres.
The following morning off we went to drop the friend to the airport and then straight to lamps shopping.
It didn’t take long to find what we liked — two beautiful glass chandeliers.
The lamps we had before were purposely of different colours, and so we decided to keep it that way and picked one blu and one red so to match the main colours of the kitchen. That very same afternoon, the travelling husband was off, and so he fitted them straight away.
Unfortunately not being a DIY lover he tends to become cranky while engaged in those type of jobs. The awkward position he had to stay to remove the old lamps and fit the new one then, didn’t help his mood and at the end of the job his neck was as crooked as the chandelier he had just taken off.
Crancky and crocked he totally misunderstood my instruction about which colo had to go to which side of the island and so when I received his proud text with the pic of the two chandeliers on and perfectly working I had not the courage to say he had to switch them. Well, I didnt do it straight away, I waited a few minutes and then let him decompress his more than likely anger attack while I was out with the girls.
On my way home after collecting daughter number two from art class and daughter number one from hockey practise, I received another text from the hubby. Thinking it was the pic of the two chandeliers hanging from the right side, I opened it immediately.
“New bloody lamps on and now she wants them switched. I m going to tell her it is not possible”, the text said. Ops, it was not for me.
“sorry that was for Alessandro”, a second text a few seconds later.
-like I didnt guess it-
I said nothing and resigned to have the lamp colourwise not in the right place I drove home.
A strange light was irradiating from our kitchen, a bit like those illuminating the windows in those Amsterdam areas that made the city so famous.
When we picked the red chandelier, we didnt think about the effect of the colour through the glass. After all, also the lamp we had before was red. Just it was not made of glass.

When I entered the room, the dim red light made my kitchen look like a cheap night club.
The travelling husband, terrified at the thought of removing and refitting the lamps again, tried to sound cool:”how do they look?” he asked
“reddish”, I said
“yes, the read one is a bit too reddish, but the blu is nice…we have just to get used to it”, he said
“Maybe, ” I replied.
We both spent the following day trying to get used to the new light and believe me that was not easy as during the day, with the sun hitting it the lamp reflected a kind of psychedelic light, perfect for disco parties, not so much for cooking. In the evening instead, once the light was switched on, you were suddenly transported from a hippish atmosphere to a club prive’.
“honey, I am sorry, but the only way we can keep this lamp is that we install a pole around which I can wrap my curvey self and dance.”
The travelling husband looked at me, looked at the ceiling and the floor, and then looked at the chandeliers. He is a numbers man and rationally drilling the roof and the storey to fit a pole dance was a far a bigger job than substituting the red lamp with one of a different colour. To him, the most rational thing to do was to abort my change in the career before it started and buy the other blu chandelier.
Here we are now with two beautiful blue glass lamps hanging over the kitchen island…. a bit boring but the light is great, also…….because you never know what the future will bring you, I carefully stored the red chandelier in the attic. 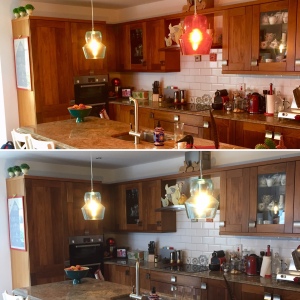