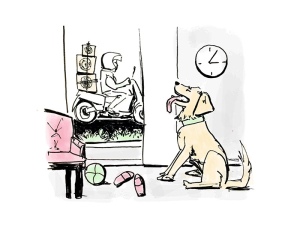 They say you only understand what having kids means when you start to enjoy going to the supermarket, because it is your only chance to move around on your own!
I learned on my skin that it is true but, I also soon realized, that it was a big waste of those free few hours. They were too precious to go food shopping; shoes shopping maybe, but grocery shopping? Seriously?!
And so I started to go to the supermarket with the girls. At the beginning it was easy with just daughter number one on the baby seat of the trolley. When daughter number two joined the family, I started to use the carts with the double baby seat, but then daughter number one’s legs began to be too long and I was risking to break her ankles every time I had to sit her in or out the trolley’s seat. She had to go inside the cart, literally. Daughter number two was still fitting in the baby seat.
This arrangement worked pretty well for a while, but then daughter number one body started to grow along with her legs, and the space in the trolley for the grocery began to be very limited. Thankfully, by then, they were both walking, and they could follow me on feet. Unfortunately to toddlers doing the weekly food shopping can be quite boring and they started to complain about it. – Really? You tell me how boring this fecking things is?-, I always thought in front of their whining,that, I cleverly stopped buying them a little toy trolley each.
Happy days, weekly food shopping became fun……for them. For me, it only meant that once I was done, I had to go back around the aisle to put back what they filled their trolleys with.

Food shopping day became the worst day of my week as on top of the supermarket hassle, the carrying the bags in and the unload, I had then to store everything away that always took me ages.
Then, one spring day, my life changed forever, and my food shopping troubles disappeared all at once.

Abigail, my American friend, had just moved from Atlanta to Enniskerry, a little town at the feet of the Wicklow mountains where I drove my girls to school every morning and just minutes away from my house.
One day she rang me asking for help. When I got there I expected some emergency, and it was actually to her, but thankfully nothing serious: she was just fed up with the postman to look at her like she was a total idiot because she could not understand a word of what he was saying.
My first reaction was a big loud laugh, and still giggling I asked her:” you are serious? you, American, native English speaker, are asking me..an Italian, to translate the Irish postman for you?!”
Anyway, back to the point, once the postman was sorted, the Tesco man it happened to arrive while we were having coffee and she asked me to talk to him too. His accent, even if better than mail carriers, was still incomprehensible.
I didn’t know the local supermarket was doing home delivery: I could have saved years of hassles if I had only known before. Since then I started to shop online and having my grocery delivered at home, except for my meat. That still requires a visit to the butcher, but that is easy and rewarding as every butcher in Ireland has been cleverly trained to make their female customers happy calling them a variety of nicknames that can go from:”luve’, to Sweetheart”, or ” Honey”.

Back in the old house, the Tesco man was always the same : a nice little man on his sixties, kind and cheerful that every time there was something freshly baked in the house(those were still the days when I was a much more efficient housewife), never said no to a slice of cake or a bun.
At the time, our old cocker had just died, and we only had little Clara who always ran to him as he was, to her eyes, the man who brought her treats.
When big ears german came along, it was a puppy and not a threat yet, either for the Tesco man or my groceries. After we moved to the new house, I didnt start shopping online from the very beginning, but it didn’t take long before I was back to my old routine of ordering with one click from the comfiness of my couch.
The difference is that here, the Tesco men change nearly every time, and big ears german is a fully grown brown version of my mini pony who welcome the arrival of the Supermarket truck with incredible excitement.
Tesco man equal Food, a simple equation in Kurt’s head.A simple equation that brings jumping and barking at the window while the poor delivery guys look inside the house with terrified eyes. They usually started to unload the track pretending the dogs don’t bother them, but I know it is not true and before letting them in I always graciously lock Kurt and Clara in the garden. The food carrier with the same gracious always say I should not worry because they are fine with dogs. I usually smile thinking that they can be as comfortable as they want, but once they will be caught in between Clara, Kurt and the food it won’t be pleasant!
So, because it is always better safe than sorry, the entire time the Tesco men brings in the shopping, the dogs whine from outside with their noses smashed on the garden door.

All this, of course, after the Tesco truck makes it to us, a thing that is always a bit of an adventure for any new driver. For some reason, the coordinates linked to our address on cars satellites are wrong, and they end up to absurd locations unless they are local and have a vague idea of the area, but then the problem is another: They usually stop at the house down the hill. “AH, NO. For God sake. You people already took my t-shirts and Swiffer dusters. You are not going to take my grocery too!”. Thankfully the food is not as tempting as a parcel coming from Italy, and they are told to come up.
This morning was no exception, and I received the usual phone call from the Tesco man saying he got lost.
The guy was bright enough to tell me what he could see on his right and left-hand side so that I knew where he was, and I could give him precise directions, starting with the fact he had to turn around and come the opposite way.
“Oh Ok mam, I have to reserve, yea.Stay with me on the phone.”
I tried to suggest him to go ahead for a 100 meters and turn at roundabout instead of reversing on a countryside road that can barely fit two cars, but the noise of horns and swirling tyres told me it was too late. Now he only had to go straight and turn to the first lane on his right: easy peasy! Except, he missed it and with breaking voice told me he was lost again.
At that point, my maternal instinct kicked in: “ok. don’t worry, stay where you are, and I walk down the road so you will see me.”
So I did, and there he was eventually in front of my house.
Did he park on the road as the others do? Nope, this one reverse, obviously something he adored to do and popped on my path running over half of the flowers I had bought to plant.
I am stood there baffled and probably with an idiotic expression.
He got out the van, gave me a thumb up and thanked me for rescuing him. He brought the shopping in, wished me a happy Paddy’s weekend and went back into the truck.

I am still standing at the door bewildered and quite honestly so glad to see him go, but he doesn’t go. He starts the engine and rolls down the window: “Now I know my way for next time”, he says with a cheerful face.
I look at the desolation of my front path, raise my hand to wave him goodbye and mumble:”I hope there would be no next time “.