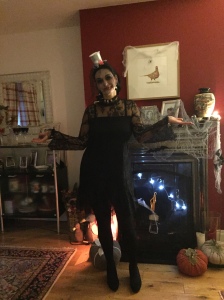 Today I eventually woke up for the first time with no headache. It looks like my migraine is gone,just in time for the party we have tonight. It is a fancy dress party and I am now regretting not to attend it dressed as a zombie. After I have spent the last three days in a semi-comatose state, locked inside my house in the dark, I could in fact just show up with my bare naturally greenish face and be as scary as hell.

Even if the headache is gone, a few days on heavy painkiller left me a bit numb.Breaking all my records I managed to injure three of my fingers at once. I went to the garden to get some flowers and a humungous rose’ thorn got stack into my right index. Once inside and on my way to remove it I stopped by the bin and pressing down the rubbish I sliced two other fingers on the lid of a can I had just opened.
Three plasters later the cuts were still bleeding heavily, the thorn was forgotten and now totally disappeared under my skin.

When we got together, the traveling husband was not told since the beginning what he was bargaining for, until the first time he saw me slicing a cucumber and my fingers without making a sound until the chopping board changed its color from white to red.In that occasion he discovered that the tip of my left index has no sensitivity left after I chopped off all the nerves,along with the finger,and doctors had to surgically stitch it back to the rest of the hand. Thankfully love won over the fact that his wife not only has a problem with kitchen knives but she also needs to be told when she cut herself on some particular fingers in order to avoid her to bleed out.

Years after years and cut after cut the traveling husband’ s training as a surgical nurse when he was in the army, came very handy and after that one time I severed an artery on the palm of my hand, he also learned how to categorize my injuries: if the blood squirts everywhere for over two hours,that is the benchmark that the matter can’t be resolved at home, a drive to the hospital is required.

I might not have needed to go to the hospital, but I was extremely uncomfortable: the rose’s thorn went more in-depth, and because I am too much of a sissy to go deep in with a needle I just decided to leave it there and simply covering it with a bandage so that it won’t hurt at the touch . In the meanwhile, the plasters wrapped around the other two fingers were not sticking because I kept wetting them and as a results everything I was touching it was stained in blood.The only plausible solution I could think of was covering the plasters with waterproof sellotape for parcels.
I know, utterly bizarre but it worked.I stopped dripping blood everywhere and rigorously using only two fingers of my right hand I also managed to dress up and more or less successfully spread vampires and witches make up on me and my gang.

At the end my persistence was rewarded and right in time for the party I could remove in total safety the plasters and use my fingers to hold my glass:four fingers because the thorn is still there………..a problem for tomorrow,when I will hopefully be braver and use that needle .