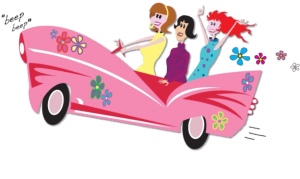 Thanks to the women moon circle the walk and morning coffee trio had free tickets for a health and nature exhibition called Vitality. One crazy Italian, one mad Irish and one crazy Swedish are all on board of the self-fuel filling car and,with attitude, they venture to Dublin.

The exhibition is impressive. The majority of the visitors are people working in the health industry, but clearly, there is a good crowd of privates too.
We have a map, and we start our tour. Being early afternoon already our stomachs are rambling, and we decided to start from the stalls with free food samples. After having filled ourselves with every different variety of nuts, seaweeds and energetic bars, we are as thirsty as dogs in the desert. I must admit that if the healthy snacks were pretty good, the healthy drinks were another story, nothing compares to my homemade smoothies. Anyway, after drinking hem juice, Donegal seaweeds and some exotic berry juice from Latvia we are still dry and also have a breath that smells funny.

We met our friends who are there to promote the 2019 Moon Mna’ diary and then direct our attention to the cosmetic sections.
In the first stall, there is a lady very hard to miss. She reminds me those “throw in “guys outside the restaurants in Venice paid to kidnap potential customers from the street. She did the same with us. Her vitamins elixir was tempting and, according to her words, definitely, a must have in every woman cupboard. While she spoke to us, I could not refrain myself from staring at her pump up lips and her extraordinary long eyelashes, wondering if she drunk those vitamins more likely injected them. My twisted mind projected her inside the set of “Death Becomes Her”, and I imagined this lovely lady, who was spending so much of her time to explain us her products, with her head turn backwards and her butt living an independent life like Goldie Hawn’s one.

The next stop was a young guy selling two unique vegan products created by a German scientist in the early fifties. The products came in a huge bottle, but after he explained to us their characteristics we understood why. The first bottle contained a liquid body soap that could also be used as shampoo, washing up detergent, floor detergent, laundry detergent and for every other item that pops in your mind and needs a wash. The second product was nothing less than its matching body cream. Well, nothing special about it you might say, except it was edible. “Wow, so we can moisturise our hands and then have it on the side of ur cakes?”, We giggled, but our joke stayed pretty much appreciated and we have been showed how to use it instead as a toothpaste or a breath freshener. Still, having that horrible breath after the unfortunate drinks we tasted earlier, we immediately tried it, and delighted with our fresh mint breath we hardly contained our joy. Luckily for us, the poor guy exchanged our excitement for a will to buy his products and leave us with a bag of samples and an online code discount.

We have been walking for around for over two hours now, and we had done a full tour. One last stop and then we will go for a well-earned coffee break.
We are all attracted by some natural deodorant. The three of us have all teenagers or preteenagers in the house, and that is when deodorants become essentials.
We all use similar natural products already, but we have never seen them in such a colourful and appealing package, certainly ideal for the youngest ones. We set our mind and decide to buy one each for our daughters.
To me, this is all entirely new as my girls had never had any body’s odour until, literally a week ago, daughter number one arrived terrified in my bedroom with her t-shirt in hand: “Smell at this; it is bad, disgusting. Is it me?”.
And so now we know that the hormones are starting to get alive in our household too and she needs a good deodorant. Daughter number one is very sporty, and so before I ultimately buy the deodorant, I feel to ask the sale lady if it is effective even against strong hormones of active teenagers. Before I could finish my sentence, the lady was already replying to me: “Oh absolutely, lots of women in menopause use it”.
My friends burst in laughing, the seller lady blush turning the same colour as a lobster and attempts some very clumsy apologises. I don’t feel like to take her out her misery and despite my extreme will to laugh at the entire situation, I very calmly and seriously replayed to her specifying that the deodorant was for my daughter, and if that bloody place were not that warm I wouldn’t have looked like if I had hot flashes that, even if I had it would have been entirely natural as it is a course of nature as she should know. At that point, the sale lady would have happily buried herself behind the counter, but instead, she gave us all three of us two euros discount on our deodorants. Menopause is not too bad!

Exhausted we eventually approached the Caffee:”Be Inspire”, that its name. Disappointedly we got all but inspired. The waiter, who was also the barista, couldn’t be more clear about how much he hated his job. Only when was the closing time we had to see a sparkle in his eyes. He started to fast move around the tables inviting customers to leave, and like a well-trained Sheepdog he guided his flock out. We were ok to go as we had finished our cakes and tea but we needed the bathroom, and so we tried our way back towards the exhibition rather than the exit. Like we were three rebellious black sheep he immediately stopped us and with a firm hand, he signalled to go out the other way.

Going to the car without going to the bathroom first was out of the question. Our only chance was to go back to the main hall before they shut everything down for the day. Nobody was at the entrance to check, we made it back inside and started to follow the luminous signs to the toilets. The last-minute wee was more common than we thought and we joined the queue crossing our legs like children. We could hear the speaker from the main hall advising people to collect their belongings and leave because they were closing for the day. We split to optimise the short time we had left. I decided to try to go exploring if there were more toilets, there must have been in such a big place. My guts were right, and I could see other signs for the bathrooms. What the signs didn’t specify, it was that they were men’s toilets and as much desperate as I was, I would have never been able to use a urinal. Defeated and still with my bladder on the verge to explode I went back to where I was, only in the meanwhile the queue had cleared up. The trio made it to the bathroom and out the door right on time.