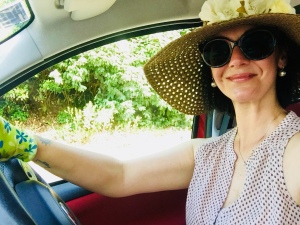 Last weekend was a busy one, I wouldn’t push it to say it was a pleasantly busy one but let’s say busy. On Saturday we had to report for duty at the school summer fete. Last year I managed to skip it as it was my first day out of bed after two weeks victim of nasty bronchitis. If you are wondering if I danced naked in the middle of the night in the rain to fall sick and skip the fete, no I didn’t! As much as it is hard to believe someone can naturally get bronchitis in June.

This year I asked to be assigned to the toys stall and not the cakes one like all the previous years. At least I didn’t have to bake, and I could make sure that neither daughter number one nor daughter number two would buy back some of the toys they have donated. Did I say they have donated? Maybe I should have told the toys I made them donate, under the threat that there wouldn’t have been any new toys or presents coming in the house if something would not have left first.
With her birthday approaching daughter number two panicked and filled three bags of babies dolls and barbies. Daughter number one, whose birthday is not until November, decided to act in advance and said goodbye to all her Spiderman and Batman figurines and her collection of ninja turtles. They were lying untouched in some under the bed storage boxes anyway.
Remote control cars and the mechanical centipede are still living with us keep making me tripping and the dogs going bananas. The weather was a blessing, and my stall mate proved to be a good company, and that is a blessing too. There is Nothing worst then been stack all day with someone you don’t like.

On Sunday we were all up incredibly early, probably since on the previous evening we settled for an early night being all three shattered. The weather was supposed to be cloudy, we had all day ahead of us, and so I suggested to run briefly to the shopping centre to buy sandals for the girls. I was there the previous week, and I saw many pretty candidates for them.
After a bit of drama from daughter number one who hates shopping, we hit the road. At not even eleven we are already there.
By twelve we have been in at least six shops, and none of my children could find a pair of sandals that they liked.
One refuses to wear open shoes unless they are flip-flop and the other one she would wear them, but they are not comfy. Out of energy and patience, I bought them two pairs of flip-flop each. They are fresh and comfy and I m sure that when they are in Italy on their own, some sandals will magically appear on their feet.No way their fashionable grannies will bring them out in the evening in flip-flop or crocks. I will get the blame for my daughters not having proper summer shoes, but they will be forced to wear cute pretty girly sandals. It will worth it!
Not being as fussy as them, I instead found few beautiful things I liked. With our bags full of clothes and flip-flops under the table, we were now at the coffee shop pretending to have delicious paninis and sending pictures to the travelling husband who was taunting us since yesterday with happy pics of himself drinking champagne and eating humungous eclairs while watching the Roland Garros live.

When we got home, it was still reasonably early, and so I decided to eventually move some of my roses and hydrangeas in bigger pots that I bought with my mom to make her happy and shut her up last time she was here.
With gardening, as always happens, you know when you start but not when you finish. I did much more then repotting few roses and hydrangeas, and when I was nearly done and only left with the basil and the lavender bought at the fair the previous day,I run out of compost. My first instinct was to leave everything as it was and plant them the following day as I was starting to be tired and too hot. The cloudy sky had cleared out, and the sun was shining in all its power and intensity.In the end the will to finish and have my garden in order prevailed.
My good garden centre is just down the road and it is open on Sunday too. As I am, I jumped in a boiling car and went.

I forgot that with the beautiful weather city people love to come to the countryside and they love to picnic in the park of the castle close to us. That it wouldn’t be a problem if it were not for the fact that a hedgehog would be faster then this summer Sunday drivers.
I am tired, I am hot, I have the girls home alone,and I am stuck behind a car most probably driven by a tortoise. I can understand the road is narrow and full of twist and turns and it’s not even correctly asphalted but 30 km per hour ? really? As soon as I have some visibility I overtake. Well, maybe I didn’t have that entire visibility I thought:A police officer jumped out from the side of the road raising his arm. It was not waving hello at me!
An infinite series of insults crossed my mind, but I managed to smile at him.
The officer looked at me and went,”In a hurry to go back gardening mam?”,”Or just in a hurry to bury the body of crime?”. We have a jocker here, I think and tried to excuse myself,”I know I know officer,I shouldn’t have overtaken but he was incredibly slow, and I am in a hurry to buy some soil and going back home as I have left the kids on their own”.A thing that is absolutely against the law but it was better than confirming that I was in hurry to get more soil to bury someone’s body ,right? He put on a serious face,”Mam,do it for the kids then, slow down.This road is dangerous”.At that point I wanted to laugh on his face as I drive it at least eight times a day but with extreme curtesy I simply replayed that I know and that my car could go through it with no driver.
“Well you just do it for the city drivers then, they panic enough on these country roads without the locals giving them a hard time”.Put it that way,he could actually be right but ,also,who cares:I am tired ,I am hot ,I am in hurry and right now I just want to get to the garden center ,buy my compost and go home. When I started to think we are done,he gave me a closer look and said:”And I bet you are not even wearing proper shoes, are you?”.Without saying a word I instinctively look at my feet comfortably resting in my garden clogs.He couldn’t see them but he knew:”You know those things are slippery on the pedals? I keep saying the same to my wife too.when you women will get it that you cant drive in flip-flops or clogs?”. “Good”,I thought.If he is taking about his wife we are getting friendly here.Now I know I am getting away with no ticket,and so I can’t help but waving my gloved hands in front of him:”Yes officer,but at least I have rubber gloves that perfectly and safety adhere to the steering wheel!!!.”

81 thoughts on “Compost For Crime”