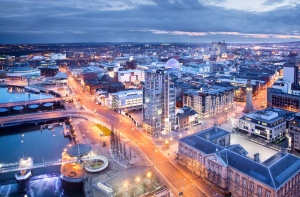 As predicted by the forecast,on Tuesday morning the heat wave was gone.We were back to the traditional Irish weather :scattering showers and dry sunny spells.More or less all year around this is what characterize the atmosphere on this side of the world.
Looking at the sky, this Tuesday the scattering showers seemed to be persistent and permanent while the chance of some sunny spell appeared very shy.In the mist and the drizzle the travelling husband dropped us at the train station.My friend and her daughters were already there ready for our little mid term break away in Belfast.

My last visit to Belfast goes back when I was still pregnant with daughter number two.At the time Ikea was not open in Dublin yet and we had to drive up north.Actually that was not an happy memory at all as early contractions arrived while in there. Fortunately, we were around the furniture section and it was not that difficult to find a comfortable couch to sit(standing was not really an option). After debating if keep shopping or going to the hospital ,we kept shopping.It was the right decision!The little creature resisted in fact an other three weeks before making her entrance in this world and I,not only would have missed all my much needed shopping but,I would have waste precious time in an unknown hospital for nothing. Sometimes I can’t help but wondering if this is why she loves so much going to Ikea.

The girls excitement for this two days little adventure was palpable. In less then two hours we were there.Our itinerary was simple and strict: On the day of the arrival str check in at the hotel and then shopping and browsing around the city;On the day of the departure, interactive science museum.

Despite the fact we were further up north,as the hotel’s receptionist remarked when we said we were coming from Dublin,the weather was much better then the one we left behind.It looks like that in Belfast those sunny spells had found their way to shine.Shattered and hungry we start looking for a nice place to have dinner. A task requiring research and patience because it is not as simple as it looks to find an agreement between four little big mouths of whom one is vegetarian but don’t usually like the restaurant’s vegetarian options.I honestly didn’t find her that difficult (and this has absolutely nothing to do with the fact she always approves my fashion choices and said I look younger then I am)but,if her mother says so ,she sure knows what she is talking about.Unless hunger was talking for her,or was it anger? It doesn’t really matter because, at the end, we had to thank our little vegetarian soul to make us end up in a very nice place that made everybody taste buds happy.

Back to the hotel the interconnecting rooms created high excitement.Not having much time to enjoy a such amenity when we arrived in the afternoon they made it up in the evening,helped by a sugar rush consequence of a stop to an american candies store.A good old fashion scolding soon descended up on them and, eventually,they all chilled down.Whoever at the time was passing in the corridor,must have been experienced some confusion overhearing the mix of Italian ,Swedish and English coming from room 427 and 429. Hard to believe that there are still bilingual kids who pretend to not understand properly their mothers native language.They were now so quiet and angelic,(and I stated without the help of any drugs),that we could enjoy a drink and a chat in total relax.

Wednesday we experienced the longitude gap.We realized we were really “up the north”.The weather was atrocious ,windy rainy and cold.To be total honest we were not that much bothered as we planned to spend the day inside the museum. Unfortunately,things didn’t exactly go according to the plan and,because it was slashing and we went to the museum by taxi and not walking we were there very early and,consequently,we were done much earlier then planned.We had lunch trying to loose as much time as we could:we purposely took ages to decide and order;we ate as slowly as we could and we also went to the bathroom rigorously one at the time.Still, we had three hours to kill.We had no options but taking our chance in the rain.We gather together our two pre teens, our official teen ager and the one who is still no fish no meat but that,has also proved to be the easiest one of the whole bunch, and walked back to the city center. A wet stroll around accompanied by some more wet shopping before heading to retrieve our bags and fetch a taxi for the train station.

During the day it rained so much that I m quite certain it stopped only becase there was no more water to be squeezed out of the clouds.On our way back to the hotel a pale sun was even starting to come out.Delighted with the change in the weather we didn’t think much of the heavy traffic on the streets of Belfast.We blamed it on the rain and the rush hour,it was five o’ clock of a working day after all.Once at the hotel,we collected our luggage and asked to call a taxi.Then,it was when we discovered that the traffic was not a normal Belfast mid week rush hour traffic. Ed Sheeran was playing in Belfast that very same evening. When we said we had to be at the station by six,the receptionist discretely laugh at us and,with a discreet patronizing tone,she suggested to forget to have a taxi in less then an hour.No panic:We had a flexible ticket and allegedly we could get the train after but that was meaning to have an other three hours to spend in Belfast.Doing what?That was not an option:in a way or in an other we had to make it for the six o’clock train.

It was not mission impossible:opposite the hotel, there was a secondary train station and all we had to do was basically cross the road and get the first train to Belfast central. Alternatively we could have also walked,fast but it was doable.In the end we went from being early to be tight with time.In a hurry and blaming it all on Ed Sheeran who ,of all the dates available, picked just that very same day to play in Belfast.We approached the station ticket man evidently stressed out and terrified to loose our connecting train. He took pity on us and let us go without paying for the extra fare. Once on the train busy chatting we didn’t pay attention at the stops.We actually didn’t even check if we were on the right train or ,if accidentally we already past our stop.Luck wanted us to be on then right train and haven’t passed Belfast central already.

The rest of journey was peaceful and relaxing.At around eight we approached the local station.We were back in ROI ,all still friends and all very satisfied for our little only girls break away but,next time, it will be only adults….just for a change and a chance of a real treat.

62 thoughts on “An only girls city break”