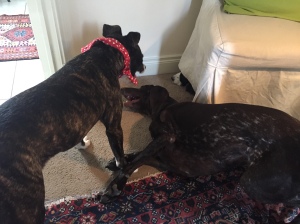 “Hey Kurt ,have you seen that?”….”what?you usually bark at everything it moves and you missed that big car pulling over in front of the house?Dear Lord you really have that head just to keep your ears apart”.”Now it is a bit late to start barking sweetheart…..she is already in and she is sniffing my butt.”.

Good morning everybody my name is Clara and,without proud or shame,I will say I am an old cranky lady.Sometimes I am called some word starting with “b” instead of “l” but, I dare all of you not to be cranky when you are totally blind on one eye and an half and live in a house where everybody forgets cupboard’s doors open and move furniture around perpetually.Not to mention the bad habit they all have to talk to me always from the side of the deaf ear.Don’t get me wrong, I love my house,my mama,my papa…and even my two leg sisters.I love even my four leg brotherKurt,deep down.He has giant ears and long legs that,at the age of four,he hasn’t figure it out what to do with yet.He goes around throwing them up in the air all day: embarrassing!When he came along I was not happy at all but,at the time,I was young and didn’t like to share the rides on the dolls buggy.Rudy just passed away and I was eventually not “the other family dog” anymore. I was “THE family dog”, eventually.I had just got comfortable on the role of only dog when one Sunday in February big ears German arrived.He was ferociously annoying but smaller then me,then he started to grow (around his ears) out of control.Big and bold he became and once he even tried to steal my food .Wrong move man!I had to show him some discipline and he learned his lesson.

So,this is me. Even if I am not an only dog anymore, thanks to my age and my hierarchic position in the house I have some privileges:The biggest of the beds is mine and also the front seat of the car.Over the years we four and two legs siblings reached the perfect equilibrium and,I admit it,most of the time I growl at Kurt just because it is fun to see him going away with his tail between the legs. True must be said,he deserves some credit too:first of all he can reach everywhere with no effort and he always snitches us food from the counter when we are on our own;second,since he likes to play, he is the one to entertain the girls and I can enjoy my retirement .A pretty perfect setting right?So,who the hell is this creature with the spotty bandana settling in with all her things ?”A foster dog? and when did we talk about this?”,Mama is twisting things around here!It is true that she always wanted to do it but, papa always said no.He is a smart man and knows that whoever dog might enter this house might never leave it.What was he thinking allowing her to do this?I might better have a word with him tonight.Unless he has something very terrible to be forgiven for,he owns me an explanation and better be a pretty convincing one.

Anyway,at this point,whatever his excuse is ,it is too late:we will have this Pippa dog at home with us for rest of the week.Big ears German is of course happy and excited.No wonder,for him everyone is a chance fir a play.He is probably still missing Millie that was with us few days while her parents were on holidays.He probably still misses Toni’s rabbit too that,was wit us for a day.Well,may be that is missed for other reasons: more culinary then playful.

Back to us,”sharing is caring”mama says and so we have to share our house with less fortunate dogs.Hopefully I can share Kurt’s attention too.May be,at the end,Pippa will bring me a break from big ears German and a week of peace.
Now, if you would excuse me, I have to go and have a barking breakdown.

58 thoughts on “The Arrival Of The Foster Dog”