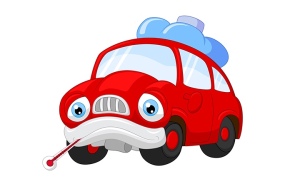 I don’t particularly like to drive my husband’s car.It is big,it is comfy with nice leather seats that don’t hold stains and don’t stink but, I still only drive it when I have to.First of all because it is always low in petrol.Second of all because I can’t connect my phone playlist and have to listen at crap radio stations playing music worthy of the worst wedding dj ever.Third of all because it is aseptic.Inside my car I have all my things.It is a kind of second home.there are objects that stay there permanently as you never know when you might need them:spare hats,spare shoes,spare lipsticks,wipes,a bag of licorice, dogs bowls,pens and papers etc etc.In one word, in case of necessity, me and my car are self sustainable. The one time It broke down and stopped in the middle of the road it would have been useful to have also a triangle among all the other essentials but, we managed just as well.

The reason I am not driving my car today is because she is at the doctor.Yes,my car is a girl and doesn’t require medical attention very often.She is no exception to the the family rule that the doctor is visited only when strictly necessary.I usually wait and hope in a miraculously fix via divine providence before going to some “consultant” of the 4 wheels.

The car I have at the moment is relatively new,and it came into my life totally by chance.
Up to few years ago I used to drive what it is now my husband estate car and he has a jeep bought mainly for hunting.He used to commute to work with the motorbike anyway.
Everything was fine until the jeep started to get old and have few problems.Nothing really major,that I was aware of! One day the husband went hunting with my car saying it felt safer.I should have known there was something more.
Like every morning I packed my two and for legs troupe and off I went. Once on the road I realized that every time I was indicating a turn the car stopped. Obviously there was an electric problem and ,for the rest of the day,I had to carefully study my route avoiding turns as much as possible.I can guarantee you,it is not easy.Not even in a small town. On my way back home,looking forward to eventually park that thing that obviously was slowly dying,I distractedly put the indicator on.The car stopped and refused to start again.My nerves were now up to a dangerous level.I rang the traveling husband ranting.Once I let my steam off ,he suddenly remember that, yes,it did happen to him too.Taking advantage of me being wordless,he quickly suggested to open a little compartment under the steering wheel where I should have found few wires and “stir them around”,that should have worked..He knew I was furiously wordless and he wisely hung up as fast as he could.Well,in fairness,stirring the wires around it worked.I might have risked to be electrocuted but I made it home.
The following day I paid a visit to all the near by cars dealer and sold it to best bidder.When in the evening the traveling husband came home and asked where the car was, I simply said “I sold it”.To be honest,I think he was glad:glad he got rid of it and glad that someone else rather then him took the hassle to do it.There was just one little tiny problem, we needed a new car and as soon as possible.This is how we picked my current car.It was available immediately and it was small.I had enough of driving around a big chunky piece of metal.I didn’t need a big car anymore.No double buggy,no big baby car seats…I could go lighter and smaller,(of course that was before the giant dog fully grew!).He inherited the estate car and I got my little funky car.That is the story.It was not love at first sight but, I soon learned to like it.Easy to park and considerable cheaper in petrol,more budget to be spent in shoes!

Now that you know how this car got into my life,lets go back to her sickness and the reason she went into surgery this morning.The other day an annoying light popped up with a sign saying something about the engine.It was so quick to pop up and go that I didn’t even time to read it properly.I ignored it and went wherever I had to go:shopping.When I took the car back,the warning pop up again and this time I did read it properly:”insufficient oil pressure,stop and turn off the engine”.It did make me panic a little because I know that if the level of oil is low the whole engine can burn but,what could I do? I was at the shopping center and I had to rush back to pick up the girls from school. I sit back a minute and reassuringly said to myself that usually the warnings are given well in advanced before you risk a real damage.It is to give you time to act,right?!I made it to the school and back home and,of course, by afternoon I forgot about the oil pressure and went away again.The car display didn’t forget and soon after I was back on the road it did warn me one more time.Again,what could I do?I was already on the road and on a tight schedule. I kept going.No smoke was coming out from the bonnet and no burning smell either. In the evening when the traveling husband arrived home I told him about the car’s oil and asked him if he could refill it.He said it was better to bring it to the mechanic, the service was overdue and needed anyway. Problem solved until he said:”Be careful because if there is not enough oil you will burn everything.you haven’t used the car since,have you?you used mine right?”.”Of course yea!”,I replay avoiding eye contacts.”Good.Keep using mine and bring it to the mechanic tomorrow”,he said well aware I was lying but obviously not wanting to sharpen my misery.

The little thing was dropped early this morning .Once home I focus on the most delicate way to tell the travelling husband that we probably have to change the whole engine because I actually did drive for nearly two days on an insufficient oil pressure.I also try to picture his possible reactions.None of them were particularly pleasant and deep down in my heart I took consolation out of the fact that he is to leave early on Monday morning .That means I have to take in the patronizing look only for two days over weekend.
The phone eventually rings and it is the mechanic:”The car is ready for collection”.I am nearly terrified of asking the price and what it was wrong.As soon he says the amount I have to pay,it is clear that there was no damage on the engine.What a relief! I swear to myself not to do it again.I perfectly know I will but, never mind, the good intention is what matters right? .”There was no oil left.you have to top it up sometimes,you know!”,Not even that petty cocky remark from the mechanic had the power to spoil my mood. Everything went for the best. I will be soon serenely driving around in my car, listening at my music and eating my licorice.
Happy friday everybody.Drive safely