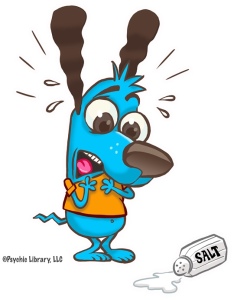 I am not a superstitious person but I used to have my good luck rituals.Back in my student years I was not to face any exam without washing my hair the night before or without wearing a specific ring.That went actually on even after my student days,weather it was before a job interview or a a particularly important event in my life.

Over the years as more busy my days were becoming as more neglected my good luck rituals have been.I got a job,a house, a dog, a husband, a kid,an other dog,an other kid,the fishes and my days became hectic and my time tight .In the morning I barely had time to pick my knickers,never mind to look for that good luck ring.At the beginning I was terrified of what it could have happened but,soon enough,I realized that nothing was going to happen to me.Having my hair washed ,blow and dry and wearing my sapphire ring wouldn’t really make the difference in the outcome of my day.

I can now positively say I am not a superstitious and neither a good luck ritual freak person but,I won’t deny the psychological comfort of it.Superstitions lie on a bed of truth after all.Like the urban myths,they are born from a true event that time after time has been modified by the word spreading.An example are the black cats.They allegedly bring bad luck but, only because those believed to be witches usually had them as pet.But what were the witches?Nothing more then a sort of alchemists believing black cats kept negative energies away.The wine spilled on the table,is bad luck merely because it used to be a luxury.Why spilling salt would bring bad luck I never really knew but,now I do!

Saturday night. The water for the pasta was boiling .The cream,the courgettes and the scampi were frying in the pan.A nice chilled Ribolla has already been poured in my glass.I was taking the salt’s jar out of the cabinet ,when it fell on the floor.Well, obviously it didn’t fall on its own,I dropped it. It is just that I have absolutely no recollection of that.One second was in my hand and a second after was on the floor.The jar smashed in a millions of pieces of glass.The granules of salt were everywhere.
Someone from the couch takes a short break from his duty of guardian of the wine and calls:”What happened?”.”I dropped the jar”,I not even turn as,to me was quite obvious what had happened.”Ouch,the salt’s one?”,I have been asked.”Why because it brings bad luck?no,that is the wine right?”I ask back.”No,spilling wine is a mortal sin.Spilling salt is bad luck”,the wise darling husband replays laughing pleased by his own silly joke.”I am not superstitious”,my voice is starting to have a hint of annoyance.”But if it was your cousin she would be upset”,he says and I think what the hell has my cousin to do with all this but,I would only say,”I am not my cousin”.That is it,case closed. Not really,he goes on:”yes but if you were….”.Now,the conversation is taking an idiotic path and I really have no time for this.I am tired,I am hungry and I want to reach that nice glass of wine that is waiting for me.I ignore my husband’s last sentence and I try instead to figure it out where to start to tied up.

Wherever I walk I can hear the “grinch grinch” noise of the salt under my feet.There are glasses everywhere,included the opposite side of the kitchen.I want to cry and I want to shout .The problem is that I don’t really have nobody to shout against.I dropped the jar:It is my fault.So,instead of unleashing my temper,I breath in and I breath out. In and out trying to expel the negative thoughts and feelings out of my mind and my tense body.Clearly I don’t succeed:my calm is not conquered back and my nostrils are open and dilated by frustration rather then the power of pranayama.

Something is moving down at the couch and tv corner.The darling husband gets up and come close to pat my back.I could have easily cut his hands off straight at the wrist line with one of the kitchen knives, dangerously handy from where I was standing.I didn’t,more to clean.I had sure not energy for that also,I just realized that the salt before touching ground managed to spread itself in every single shelf of my pantry.I am crying inside. I start to empty the pantry.In the meanwhile,as he still has both his hands attached to his wrists,the traveling husband is washing the dogs bowls just in case some glass went into them.A considerate and sweet thought but, “may be,we could have done that after cleaning the pantry,and hoovering the salt from the floor?”,I say . “If I help because I help if I don’t because I don’t you are never happy! “……his response.
We obviously have different priorities in case of domestic accident.I get it and it is fine.What it is not fine,is that he is washing the dogs bowl with the same sponge I use for our dishes. I say it and,may be,I do it with a slightly irritated/agressive tone……….what better excuse to get offended and go back to the couch watching tv?No bother to me:I can handle it myself and, of course,doing as much noise as I can.

Cleaning up salt takes ages but,now I know why they say it is bad luck to spill it:because if you spill salt it is a such hussle to cleant it up that you can’t help yourself from invoking out loud all the saints of the Paradise attracting on you a certain and divine punishment.

Forty minutes later,the the kitchen is squeaky clean,myself and the travelling husband are snuggling on the coach.Two empty plates in front of us and two just refilled glasses in our hands.Our laughter echoing in the room and I wonder:will I get bad luck or not?My thought is not even completed in my head that I spill the wine on my shirt.I laugh and ask :”Is this my bad luck or my mortal sin?”.He look at me,amused and resigned:”no love,this is just you being you”.